What’s the Difference Between a Vertical (VRC) Lift and an Elevator?

VRCs can be confusing. The acronym actually stands for “Vertical Reciprocating Conveyor” which, if you’re on this website, you probably already know. The confusing thing is that it looks like an elevator in that it lifts “stuff” up to an additional level or floor. But that’s just it. It lifts “stuff.” Or “material,” which can be anything from a pair of racing gloves to the whole sports car… It just doesn’t lift people. For that, you need an elevator, a lot more expensive and complicated permits and insurance. In short, if you just need to move things you can do it much more cost effectively with a material lift, or VRC, than you could with an elevator. In fact, you can have a VRC installed in as quickly as a week or two.

Beyond being quicker to install, VRCs can be installed almost anywhere, inside or out, and only require minor to no structural remodeling. A VRC, for example, can connect to a mezzanine or be free-standing. The same cannot be said for many elevators that need to operate in a shaftway or hoistway.

Let’s look at some of the many advantages of VRC in operation and safety, cost of ownership, cost of installation, and time.

One of the main selling points of a Material Lift  is how it increases workplace safety. It eliminates the need to have employees carry things, sometimes bulky, heavy, and in odd shapes, from one floor to another. The only thing more difficult than carrying heavy and oddly shaped things is to carry those same things up and down stairs. But, you could carry those same things on an elevator.

But then you’re people are riding in those elevators. Which creates a whole new liability and safety issue that you have to deal with. A VRC solves the exact same issue the elevator does in terms of moving material, without your employees riding inside that elevator.

Since VRCs only move material they adhere to the ASME B20.1 Safety Standards. VRC regulations are considerably less strict, but they still meet all necessary safety standards for a safe operation.

A VRCs cost of ownership is always going to be considerably lower than that of an elevator. This is due to several reasons, including a significant variance in safety standards.

Because elevators are built to transport people or goods, they are subjected to a more stringent set of standards for safety and protection. Beyond the increased up-front expenses, you’ll need more frequent maintenance, and more time and money spent throughout the elevator’s life.

In summary, if all you need is to move material, a VRC is less expensive, can be installed quicker, is safer than using a forklift, and has a lower cost of ownership compared to a freight elevator.

The difference in liability, safety and cost of ownership is so great, that a portion of our VRC installations are actually replacing existing freight elevators. 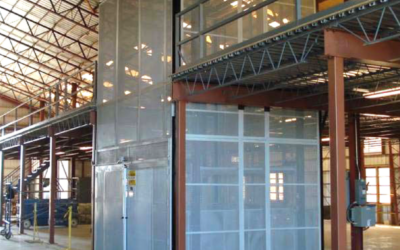 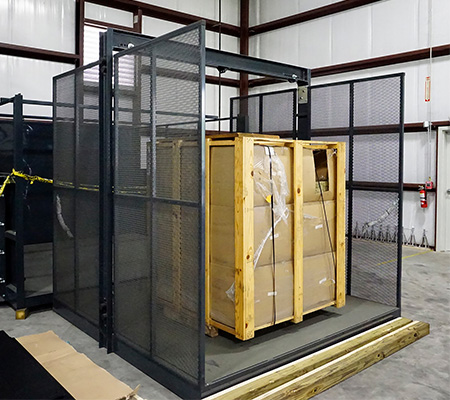 Begin the process of getting a quote today to be eligible to receive $1,000 off your first order.